Why Is It So Easy to Be Scammed in the Cryptocurrency World? 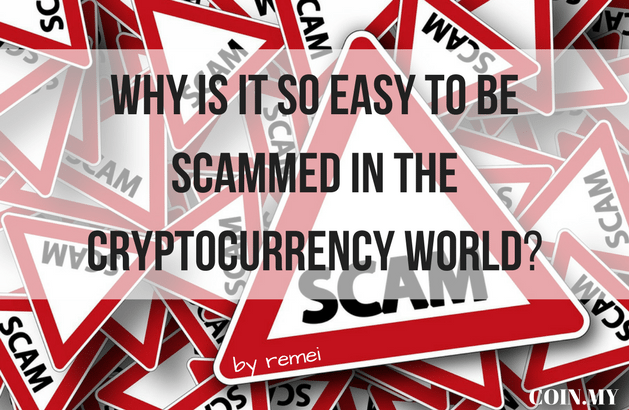 Most of us have probably been scammed once in our lives. It might be something as small as short change, or enticement to pay a fortune for a product that’s probably worth nothing . Or it could be something serious and life-ruining like an investment scam. If you’ve never been conned all your life, you’re probably the luckiest person to ever live, a downright cynist or a hermit that meet people once a year.

Either way, nobody likes to be scammed, except for the scammer of course. Scams are pretty much a normal occurence in this day and age, and lately it’s been running rampant in the digital currency world. So why is it so easy for scammers to convince people to part with their precious digital assets? You would think that with the advancement in technology, the people who are embracing it would be more wise and less gullible to ridiculous offers. Especially considering the risks associated with digital currencies.

And yet, news like these are increasing as digital currencies become more widespread.

Numero Uno. While many people are more accepting of the latest technology, very few people actually understand it. Scammers only have to show they know almost everything about the technology and what they can allegedly offer. And people who are new to the cryptocurrency world, would definitely think the offer too valuable to miss out on.

Number Two. The pseudonimity in the cryptocurrency world is both a blessing and a curse. Sure, you can hide your million dollars worth of Bitcoin from watchful eyes. On the other side of the coin, scammers and especially criminals can also cover their tracks. Of course, there are ways to trace these scammers (their kind tends to strive in that career for a long time). But once you do, what are the chances of you getting your money back?

Which brings us to the next point. Just like the point above, regulation is both in favour of, and against, digital currency as a whole. Regulation may not be the same as centralization, however, it may well defeat the whole purpose of the creation of digital currency in the first place. But more important, the majority of the world still has no legal framework for digital currencies.

So that scammer you’ve caught up with? Virtually untouchable, unless you have evidence of fraud. And even if you do, you may very well end up on the losing side here and still lose half, if not most of your money.

So lesson of the story? Don’t get scammed! Sometimes the offer is genuine, and if you truly belive you can gain something out of it, then go for it. But if the offer is too good to be true, well, it definitely is. So better be safe than sorry in this case, right?